Our customers might notice we use the shorter lengths available in cedar and redwood for our products. By using lengths down to 5″ pieces of fiber for our post caps and in our finger jointing program, we have helped develop an industry that is now using what was once scrap lumber.

Truly a renewable resource, cedar and redwood manufacturers are now using everything, including the saw dust … Please use our products with the knowledge that our industry is truly “GREEN.” Thank you! 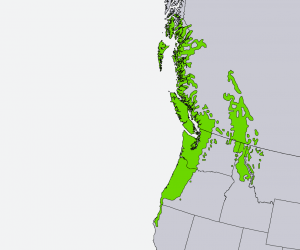 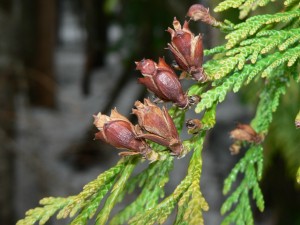 Cedar has become a preferred wood for interiors and exteriors of both residential and commercial buildings. Its versatility and appeal to several architectural designs make it one of today’s more requested softwoods.

Even though cedar is fairly light weight, quality conscious builders choose this material for its strength. It’s the perfect choice to be used throughout a building’s structure. Cedar has a built-in natural preservative which resists decay and deterioration, making it an ideal light framing material for fencing and decking.

As the production of cedar continues to increase, responsible logging practices continue to improve. Western Red Cedar is a very tolerant tree … it suffers little from insect attack. Cedar can be grown in shady conditions, thrives in favorable conditions and can withstand strong winds due to its fully developed root system and large buttresses. There is about 44 billion board feet of Western Red Cedar sawtimber on commercial timberland in the United States. Oregon and Washington have more than half of this volume. An estimated 8.7 billion cubic feet of growing stock occurs in Washington, Idaho, Alaska, Oregon, Montana and California.

Redwood’s versatile beauty and durability have made it one of today’s classic building materials. It’s one wood that is appealing in any architectural style, whether it be a traditional residential home or a contemporary office building. Redwood is unmatched in its long lasting elegant appearance by any other wood species or synthetic building materials including woods treated with chemicals.

The advantages of using redwood for exterior applications have been known for many years. The inherent natural chemicals it contains gives redwood a unique resistance to weather and insect causing decay. This makes it a perfect choice for decks, fences and shelters. Some of redwood’s other characteristics include its resistance to shrinking, warping, checking and its ability to hold a variety of finishes because of its dimensional stability.

Many people assume because of the overwhelming size of the redwood tree they are irreplaceable and should be protected from harvesting. When in reality the redwood is the best protected tree in the United States. The Society of American Foresters estimates there are more coastal redwoods in existance today than when logging began in the region. Today, California is home to more than 1.7 million acres of redwood forests. The Society estimated that coastal redwoods occupied no more than 100,000 acres of forestlands in 1964. This total area increased to 181,000 acres in 1978. Today, more than 400,000 acres are set aside in public parks, reserves, campgrounds, wilderness areas and nature study areas for public use.

These massive redwoods are proud to hold the record for being the tallest trees in the world. Spectacular old-growth groves are typically found at the mouths of rivers and where centuries of periodic flooding deposited layers of nutrient-rich soils. Virtually all old-growth trees are protected from harvest, and forestry companies invest millions of dollars to improve water quality throughout the redwood region. Redwoods are also the fastest growing commercial softwood trees in the United States. Trees that are four to ten years old normally grow two to six feet per year.

Redwood lumber comes from privately owned, second- and third-generation forests which have raised sustainable forestry to new levels. With active management, forest-regeneration and continued conservation, we will be blessed with more redwoods in the near future than we currently have today.

Thuja plicata, commonly called Western or Pacific redcedar, giant or western arborvitae, giant cedar, or shinglewood, is a species of Thuja, an evergreen coniferous tree in the cypress family Cupressaceae native to western North America. Despite its common names, it does not belong with the true cedars within the genus Cedrus. It is the Provincial tree of British Columbia, and has extensive applications for the indigenous First Nations of the Pacific Northwest.

Western Redcedar is among the most widespread trees in the Pacific Northwest, and is associated with Douglas-fir and western hemlock in most places where it grows. It is found at the elevation range of sea level to a maximum of 2290 m above sea level at Crater Lake in Oregon. In addition to growing in lush forests and mountainsides, Western Redcedar is also a riparian tree, and grows in many forested swamps and streambanks in its range. The tree is shade-tolerant, and able to reproduce under dense shade.
It has been introduced to other temperate zones, including western Europe, Australia (at least as far north as Sydney), New Zealand, the eastern United States (at least as far north as Central New York), and higher elevations of Hawaii.

Thujaplicin, a chemical substance, is found in mature trees and serves as a natural fungicide, thereby preventing the wood from rotting. This effect lasts around a century even after the tree is felled. However, thujaplicin is only found in older trees, and saplings that do not produce the chemical often rot at an early stage, causing some trees to grow with a somewhat hollow, rotten trunk.

The soft red-brown timber has a tight, straight grain and few knots. It is valued for its distinct appearance, aroma, and its high natural resistance to decay, being extensively used for outdoor construction in the form of posts, decking, shingles and siding. It is also widely used throughout Europe and America for making beehives.